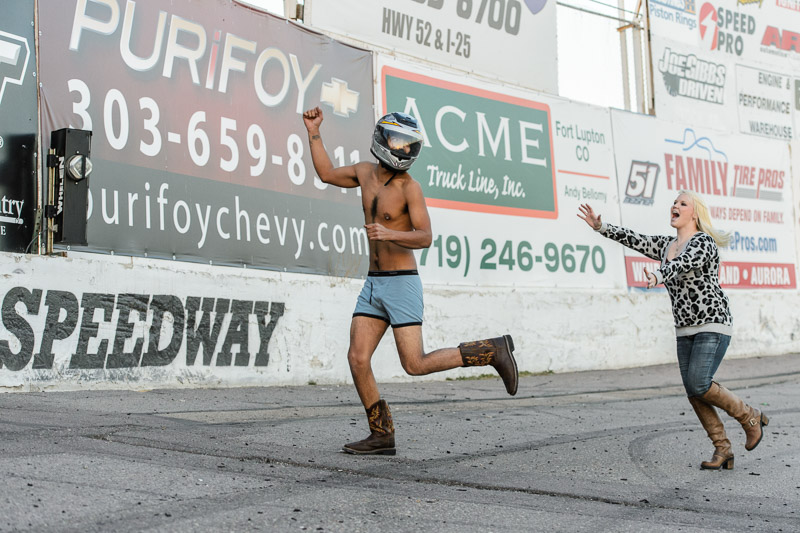 Posted at 08:19h in Engagement by admin
0 Likes

WOW, my first wedding where I photographed the brides senior photos. Does that mean I am getting old? I photographed Brittany’s senior photos 5 years ago and now she is getting married. When I met with Brittany & Eric, we planned their engagement session…A Ricky Bobby inspired engagement session. Eric wanted to include his motorcycle and I suggested a race track that was close by both of us. It’s a small local race track and I had never been there. Eric had actually raced there and was excited about the idea. .

So we were set and I met them at the track for their engagement session. As we walked around taking photos with his motorcycle, we talked, and laughed about movies. Since we were at a race track we started quoting lines from Talladega Nights, which for those of you have never seen it, is a racing comedy starring Will Ferrel. One of the funniest scenes in the movie is Will Ferrels character “Ricky Bobby” who crashes in a race and thinks he is on fire. He strips off all his clothes saying the funniest things, while his buddy tries to put out the pretend fire. Well, I said if you guys are up for re-creating it, I am up for photographing it. Eric was up for it and had all the moves down, flailing his arms flying all around in only his underwear, shoes, and helmet. We were all laughing so hard and practically crying.

I love my clients. I have the best job in the world. Head over to our website to see more of our inspired engagement sessions.